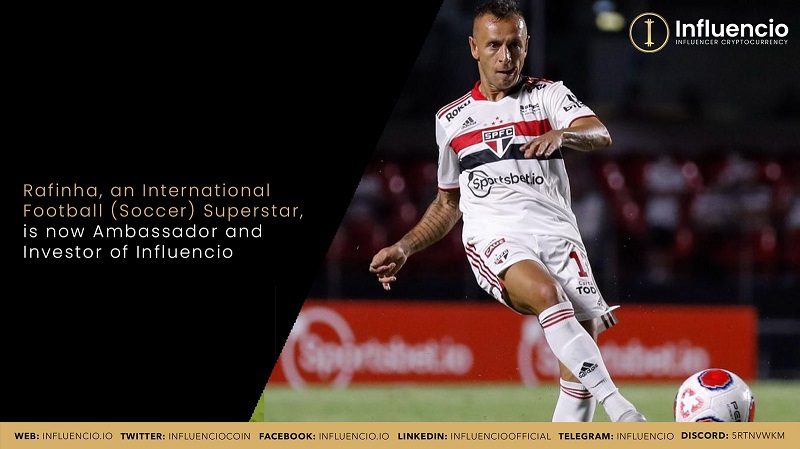 Marcio Rafael Ferreira de Souza, better known as Rafinha, is a Brazilian-German soccer player. He enjoys a successful career in top football clubs such as Germany’s FC Bayern Munich, FC Schalke 04 and Greece’s FC Olympiacos. Rafinha has won numerous awards and championships, including global ones at UEFA and FIFA level, and represented the Brazilian team at the Olympic Games.

Rafinha is loved by his fans and has a huge online community of dedicated followers: 3.5 million of them on Instagram, 1.5 million on Twitter and 1.3 million fans on Facebook. As an ambassador and investor in Influencio, Rafinha will help introduce Influencio’s unique features and benefits to its fanbase across Europe and Latin America.

Commenting on joining Influencio, Rafinha explained: “My followers are like another family to me. I’m always happy to introduce you to inspiring new projects. That’s why I joined Influencio. The team here is creating a platform that will increase engagement between followers and take public figures like me to the next level while creating earning opportunities in the process.” Rafinha added, “I’m excited to start this and contribute to my community show what Influencio is all about.”

“We are very pleased to have Rafinha on board as an ambassador and investor. It clearly shows the high level of trust in the Influencio project when such megastars as Rafinha decide to join us. At the same time, it’s a great validation that Influencio is needed in the market and we are on the right track with the development of the product.” stated Daniel Daboczy, CEO of Influencio. “Thanks to Rafinha, Influencio is now being introduced to a truly global audience.”

Influencio has consistently attracted interest from investors, the influencer community, celebrities, and crypto enthusiasts. After recently completing the first successful round of funding and a public token pre-sale, the last token pre-sale was launched directly on Influencio’s website on April 19th.

Influencio’s new INFLUENCE and ACTS cryptocurrencies (BEP20 tokens) are designed to address friction and monetization within the growing global influencer market. The project is supported by the most prominent YouTubers and influencers in South America, Europe, the Nordic countries and Asia. Soon it will also have a full global presence. The project is led by CMO Danjal Kanani along with CEO Daniel Daboczy. Influencio solves key market challenges using blockchain and NFTs with DeFi, GameFi and SocialFi elements. Influencio streamlines payments and processing, content marketing management, interaction monitoring and provides FinTech solutions for the industry.