Jake Duer and Jacob Morgan gave the Flower Mound Marcus baseball team a nudge into the next round of the playoffs on Friday.

Duer smashed a two-run right homer to start a five-run third inning that Morgan closed with a two-RBI double off the left bullpen fence to give Marcus a 5-3 lead over South in Game 2 Grand Prairie a Class 6A Region I quarterfinal series. Marcus never looked back, hitting 17 clean runs in a 17-3 win at Dallas Baptist University’s Horner Ballpark to sweep the two games of the series to clean sheets. After Duer’s explosion, Nathan Harmon tied the game with an RBI single to the left.

Caden Sorrell reinforced Marcus’ lead in the fourth with a three-pointer to left center that scored Duer. Marcus extended his lead to 8-3 in the fifth, RBI singles from Nick Mazzola and Camden Mitchell, with Mazzola executing a suicide squeeze bunt.

Morgan added a two-run homer to the left in the sixth inning to extend Marcus’ lead to 12-3. That anchored a nine-run frame and capped a three-hit game that included a double in the fifth. Duer also had three hits and a pair of doubles.

South Grand Prairie hit all of his runs in the bottom of the first inning, with starting pitcher Adrian Najar helping his own cause with a two-out, two-run single down the left. Ri’shon Pearl followed up with an RBI single down the middle, but SGP kept the bases loaded.

Nathan Harmon, Caden Sorrell and Mazzola finished the tournament with two goals each, while Marcus had 17 goals as a team. Josh Walton (1-0) clinched the win in relief when he came out of a bases-loaded jam with a double-play groundout in game two.

Marcus relief pitcher Logan Boertje was excellent at shutting down SGP for his second postseason save and hitting seven strikeouts in 3 2/3 innings of work.

Najar (10-1) suffered his only loss of the season, allowing six runs, seven hits and two walks over 3 2/3 innings with two strikeouts. Marcus starter Isaac Thornton, who is 9-1, also had a rare night off, allowing three runs, four hits and four walks in 1 2/3 innings.

Birdville 3, Mansfield Legacy 2: A walk-off RBI double by Grant Peart with two outs at the bottom of seventh put Daniel Ashlock on the winning run as Birdville tied the best-of-3 streak at one win apiece.

Game 3 of the 5A Region I Quarterfinals is scheduled for Saturday at 1:00 p.m. at Weatherford College. Hogan Shelby threw a four-hitter and hit six for Birdville (26-10-1) against a legacy team ranked 5th in the state.

Legacy (27-7) opened the scoring with a run up top of the first when Given King and Connor Crayton singled out with two outs and King then scored from an error. Birdville went 2-1 in the third when Bynum Martinez hit a sacrificial fly and scored a second run on a wild pitch.

Legacy rounded it out with a run at the top of seventh when Blake Julius finished second from a pre-inning error, went to third with a bar and scored with a single from Luke Devasher.

Legacy played without Kayden Voelkel, who was injured in Thursday’s series opener. Voelkel came into the playoffs with a .386, leading Legacy in hits, doubles, home runs and RBIs.

Dominick Reid led from the top of third with a home run to break a 3-3 tie and Gabriel Barrientes added an RBI double. McCann Libby produced an RBI single later in the inning. Lone Star (24-9) extended his lead to 7-3 on a two-out RBI single from Bennett Fryman in the fifth, then made it 8-3 on an RBI bunt single from Owen Peck in the sixth.

Frisco Wakeland 9, Frisco Independence 4: Wakeland scored five runs at the top of 10th to open an extra-inning thriller and end a two-game sweep of a 5A Region II quarterfinal series.

All five runs in that inning made two outs. An RBI double by Carson Priebe gave Wakeland a 5-4 lead, Addison Brown followed with an RBI single, scored two runs on a pass ball and Jack Bryan gave an RBI triple for a 9-4 advantage. Priebe was 3 for 5 with two RBIs, and Brown went 2 for 6, scoring three runs and driving in two.

Wakeland leveled with a run at the top of seventh to go 4-4 when Mason Priebe hit a flyball and picked up an error that allowed Brown to score. That loaded the bases for Wakeland with an out, but it couldn’t cross another run to take the lead.

Independence had a chance to win it at the bottom of seventh place but left a runner in third place.

Parker Herlehy had the big hit for Independence with a two-run double that capped a four-run finish of third. That inning included an RBI single from Wyatt Sanford and a bases-laden walk to Syver Bakken.

Prosper 12, Coppell 1: A 10-run top of the fifth propelled Prosper to a Game 2 loss and forced a Game 3 to decide the 6A Region I best-of-3 quarterfinal series. Teams play in Little Elm at 1pm on Saturday.

Oklahoma signee Easton Carmichael, Rice signee Jacob Devenny and Jacob Nelson all had two hits and two RBIs for Prosper, while Austin Rogers was 2 for 4 with two carries and one RBI. Texas A&M signee Lucas Davenport threw a three-hitter and hit six in the five-inning game, beating a Coppell team ranked 6th in the state in 6A.

Southlake Carroll 2, Wolfforth Frenship 1: Duke signee Owen Proksch conceded four hits and one run while hitting 10 in 5 2/3 innings as Carroll won Game 1 of a best-of-3 6A Region I quarterfinal series in Wichita Falls.

Tyler White pitched a scoreless bottom of the seventh to earn the save. He stranded a runner at second base and finished the game with back-to-back strikeouts.

Carroll (27-8) scored both of his runs in the top of the fourth. A fielder’s choice RBI groundout by Cole Bedwell brought in Colin Robson and Nick Jones had a miss.

Basement 8, Midland Legacy 3: Bouncing back from an early 3-1 deficit, Keller scored three goals in both the third and fourth innings to complete a two-game sweep in 6A Region I. 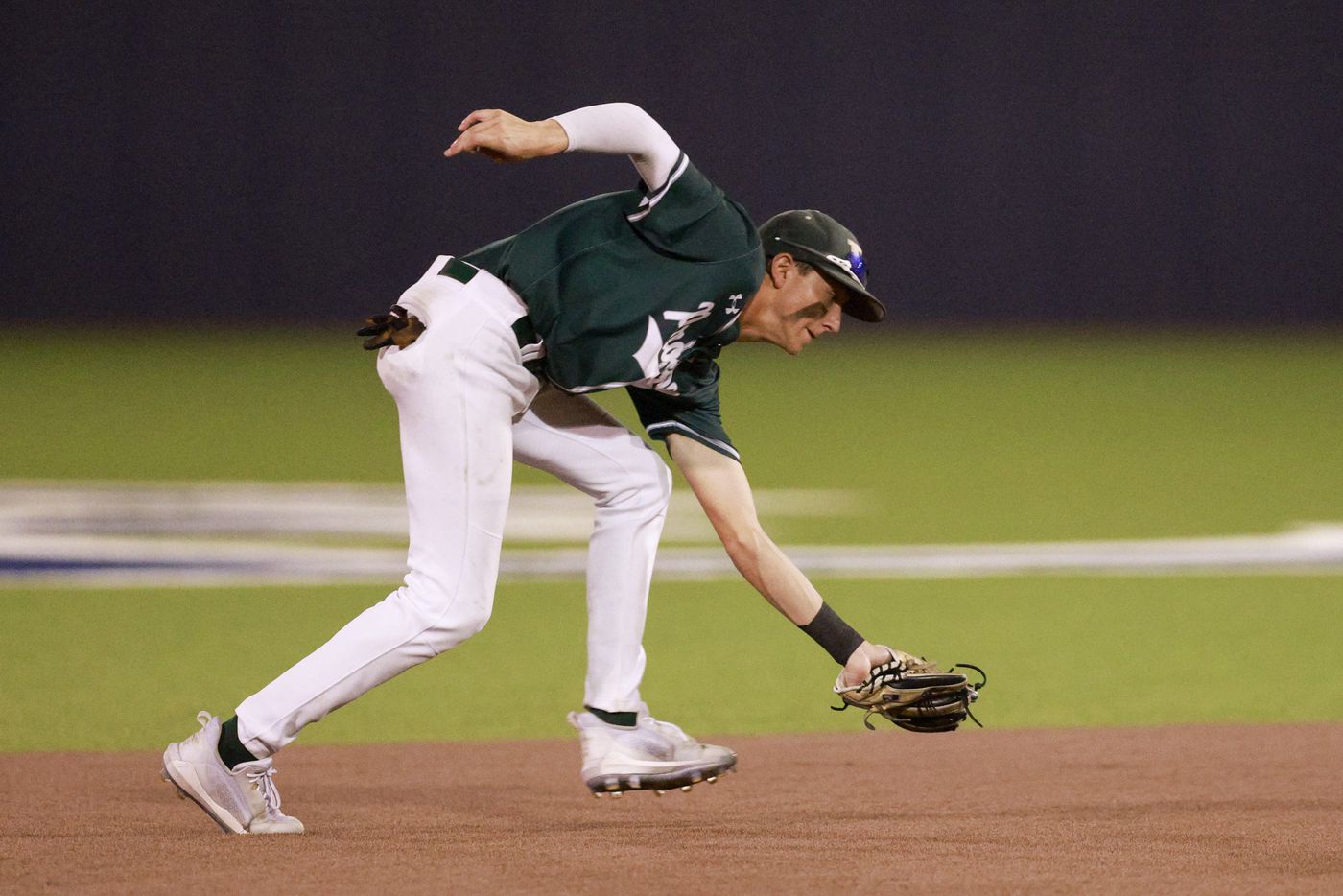 2/9Prosper shortstop Lincoln Skinner (23) catches the ball for an out against Coppell during game two of a Class 6A Region I quarterfinal in Little Elm, Texas, Friday, May 20, 2022. Prosper defeated Coppell in five innings, 12-1.(Elias Valverde II / Associate Photographer) 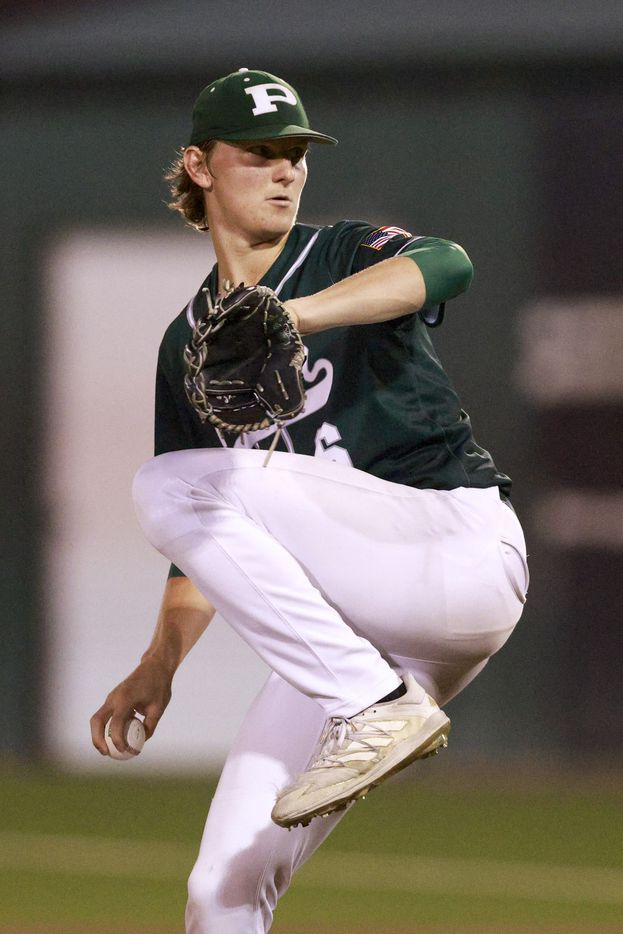 4/9Harrison Rosar (10) of Prosper celebrates after scoring a run against Coppell in the second game of a Class 6A Region I Quarterfinals match in Little Elm, Texas on Friday May 20, 2022. Prosper defeated Coppell 12-1 in five innings.(Elias Valverde II / Associate Photographer) 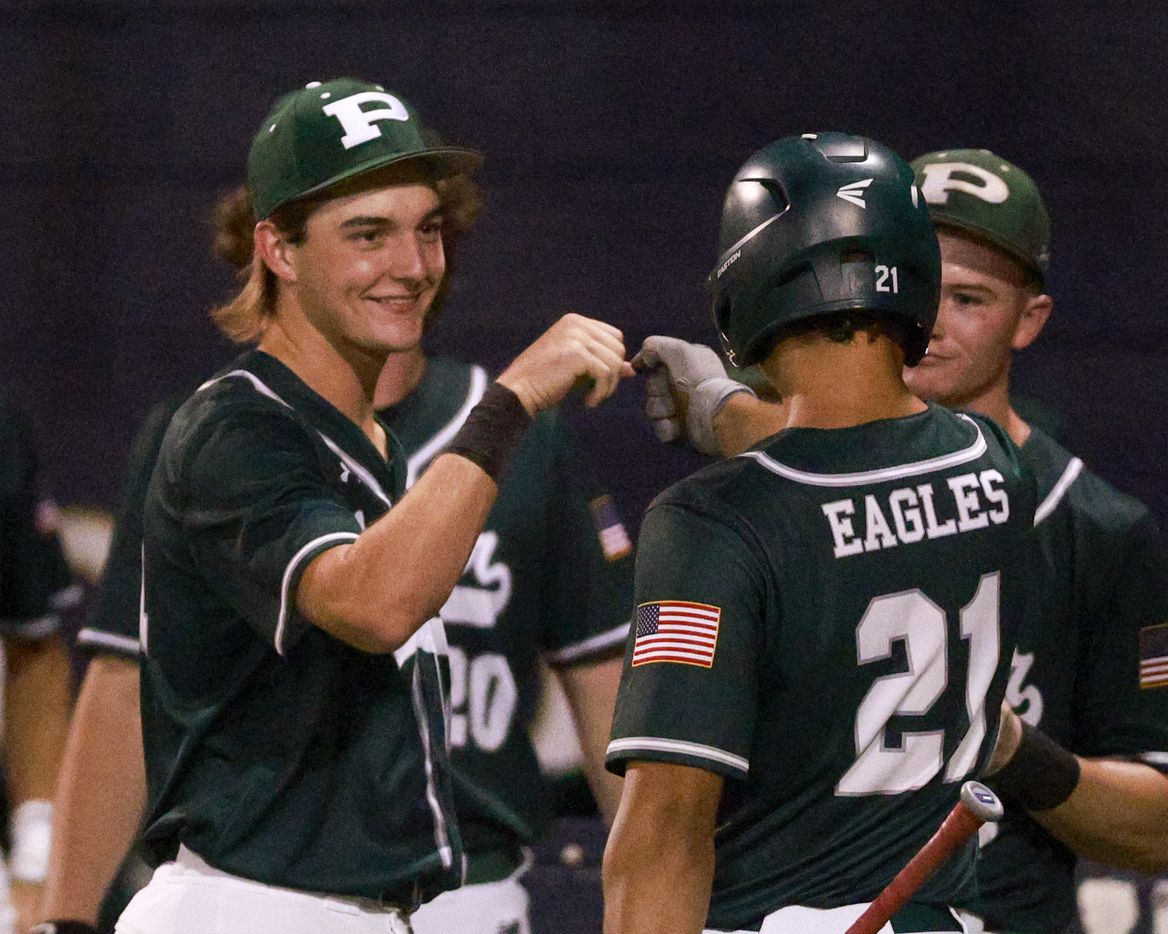 6/9Prosper’s Zach Howell (21) fists Austin Rogers (4) after scoring a run against Coppell in the second game of a Class 6A Region I Quarterfinals in Little Elm, Texas Friday May 20, 2022 . Prosper defeated Coppell in five innings, 12-1.(Elias Valverde II / Associate Photographer) 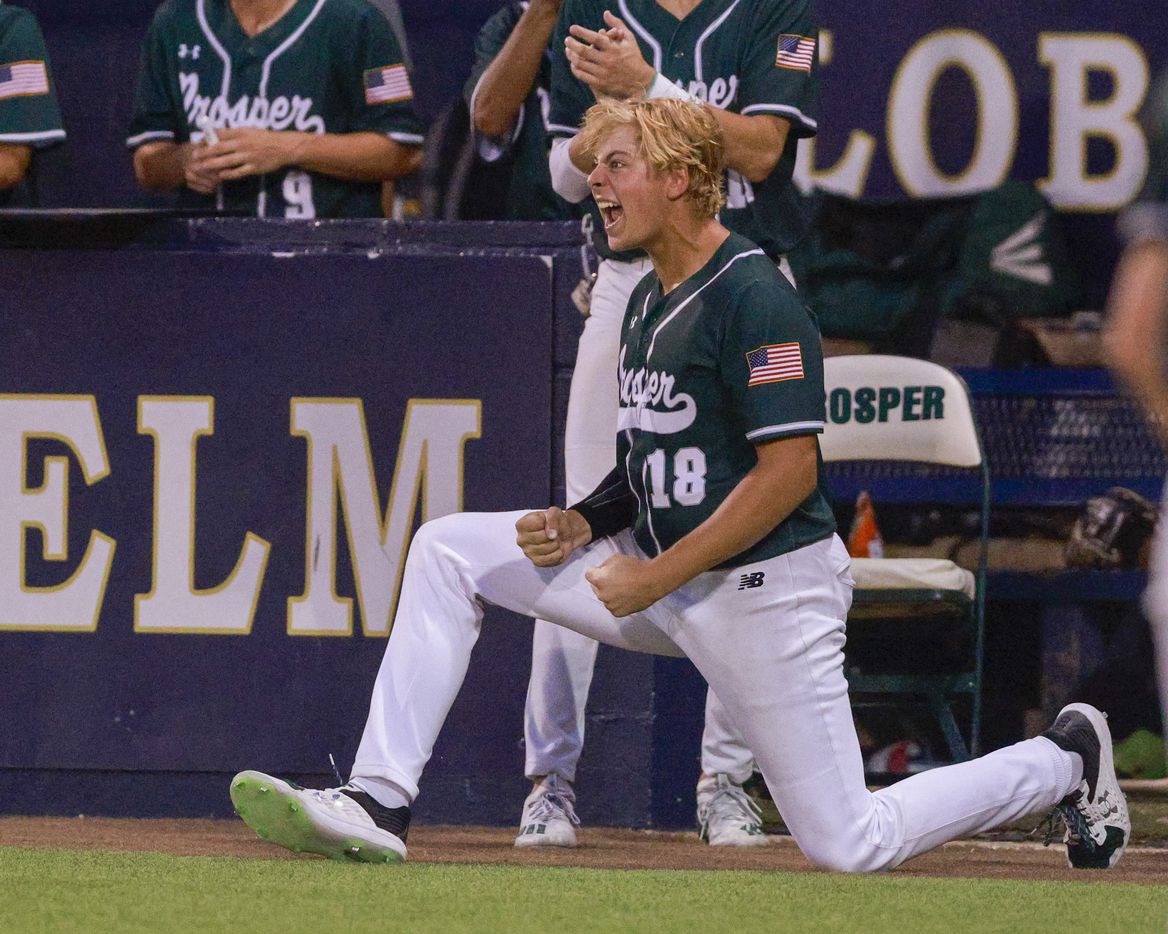 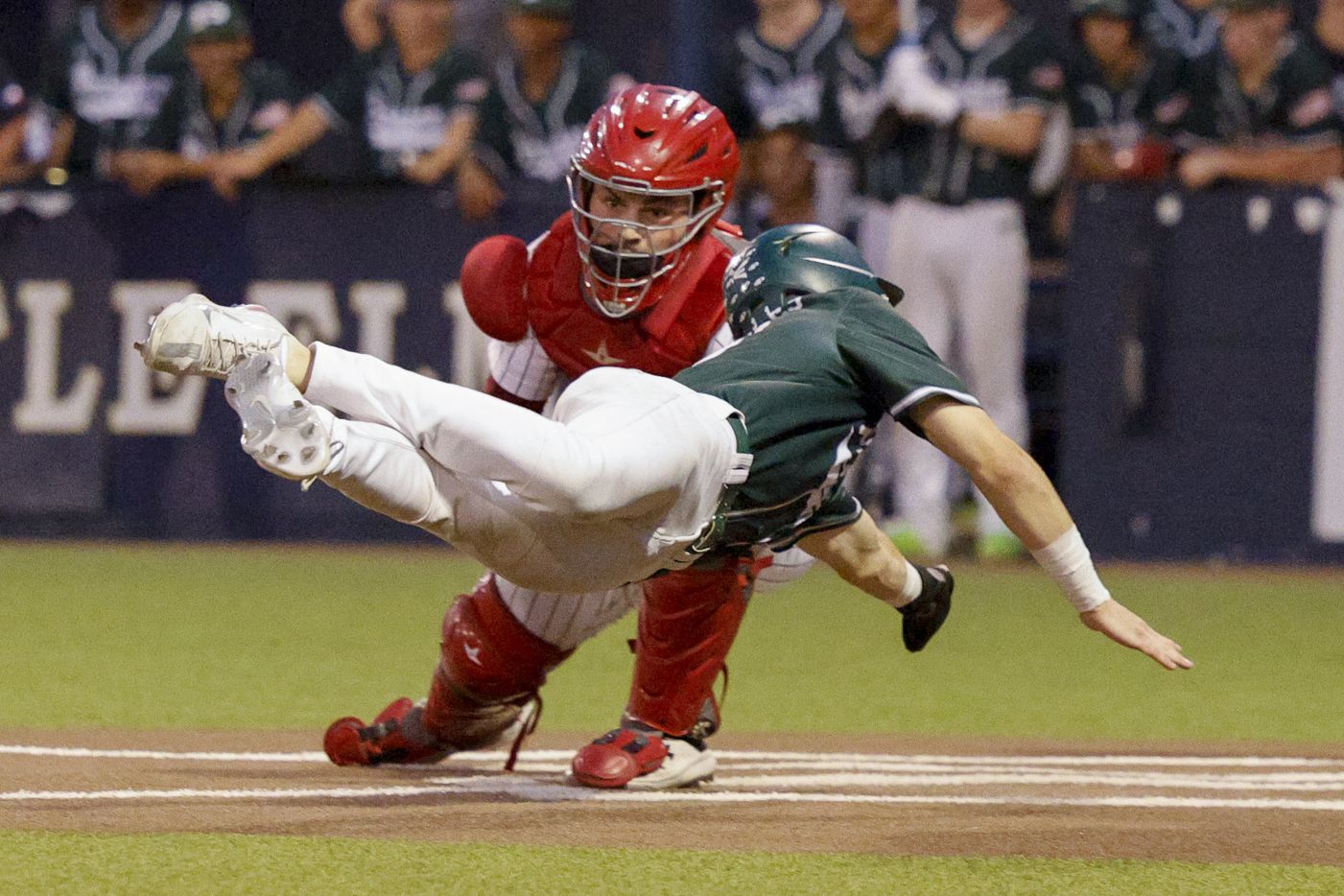 8th/9Harrison Rosar (10) of Prosper is tagged by Coppell catcher Walker Polk (23) on the home plate during game two of a Class 6A Region I Quarterfinals match in Little Elm, Texas, Friday, May 20, 2022. Prosper defeated Coppell in five innings, 12-1.(Elias Valverde II / Associate Photographer) 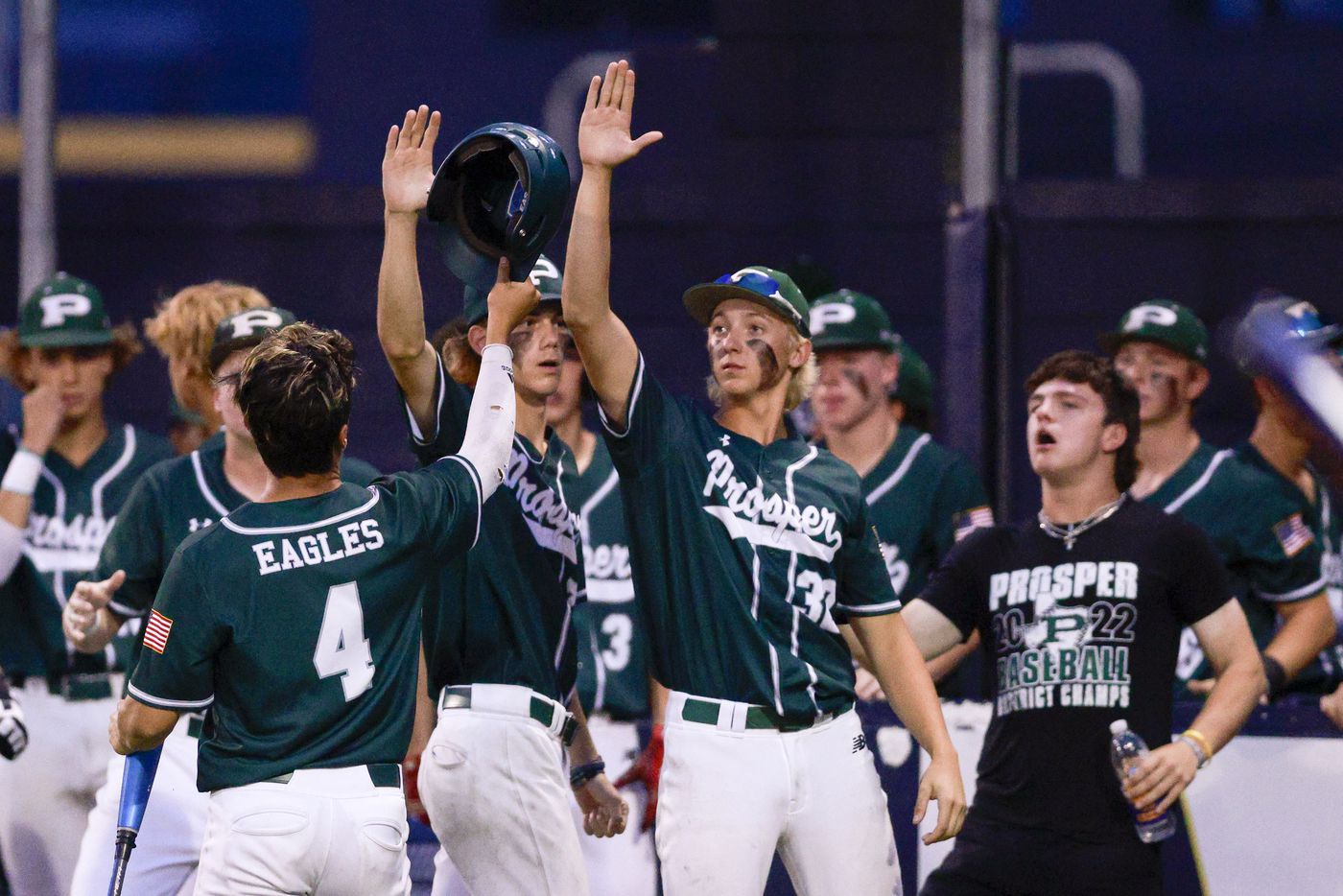 Click here for subscription options for The News and SportsDay.

Fantasy Baseball Today: Spencer Strider flashes SP1 upside, Tyler Anderson flirts with a no-no and m...
The writing may be on the wall for Alcides Escobar with the Washington Nationals
Boston Red Sox need more from the bottom of their lineup