“One minute countdown! Are you ready?” A WeChat message from my friend Cecilia came in early Monday morning urging me to book a reopened outdoor tennis court for this weekend as the COVID-19 pandemic was effectively brought under control.

In the middle of a busy day at work, I logged on to Yundongba, a commercial tennis court booking app, only to find that all available schedules had turned gray — meaning there were no more courts available. Apparently I was late.

Then came plan B. I went to Xianyu, a second-hand goods trading platform in China, and looked for a cheap place. I finally got one.

On June 7, the government updated the list of opening hours of sports venues that have reopened in the city, such as Hongkou Football Stadium in Hongkou District, outdoor tennis courts at Xianxia Tennis Center in Changning District, and basketball courts at Zhongyuan Stadium and in Jiangwan Stadium in Yangpu District.

To ensure safety, the number of people on the pitches is limited. For tennis, the capacity limit is three to four people. And to enter a venue, people must wear a mask, take a temperature check, scan the event code and provide a negative 72-hour PCR test report.

After a two-month lockdown, many sports fans can’t wait to get back on the courts and feel the adrenaline rush.

Young people like to try different sports, even some extreme sports like skateboarding, roller skating and skiing. Older people are more focused on improving their health. Sport can help them live a healthy and comfortable life in retirement and make new friends.

More parents are inspiring their children to start exercising early, and they can also get involved to build bonds and relationships.

“My wife and I encourage our child to try different sports like fencing, basketball and snowboarding,” says Chen, a friend of mine who is the father of an 8-year-old son. Chen is a basketball enthusiast who gives tips and advice to his son while they train together.

“It also helps us build strong bodies and stay away from digital devices,” adds the father.

Chen and his son play basketball together. 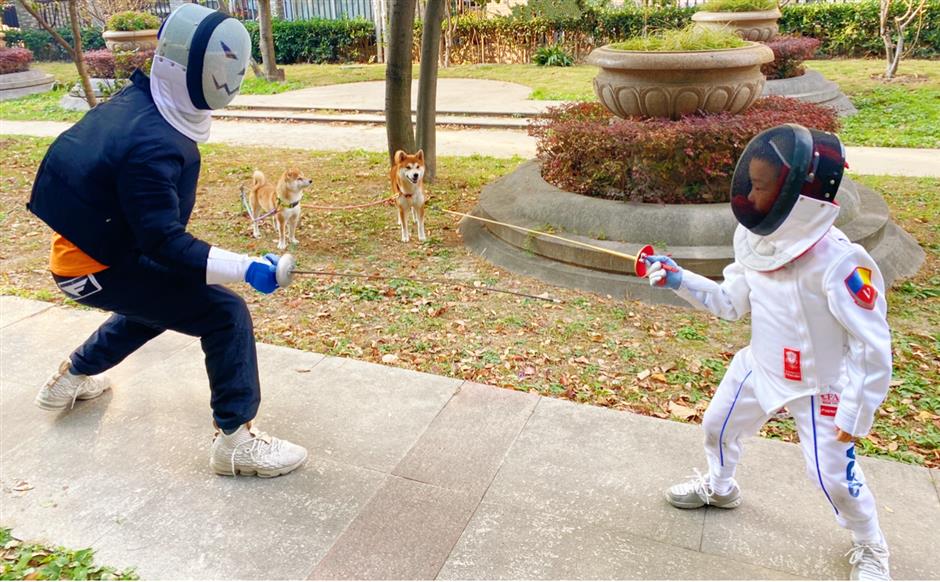 Chen and his son in protective gear practice fencing in the garden.

By 2025, there should be no fewer than 8,000 new or renovated fitness facilities, according to the city government’s plan released late last year. The total area of ​​the new sports facilities will be no less than 6 million square meters.

Take me as an example. I live near Heping Park in Hongkou District. Within a 15-minute community life circle, I can have breakfast or lunch at a cafeteria in Jiaxing Road Subdistrict, and then invite friends to play table tennis or sparring. In the evenings I can jog with my parents on the paths in a small park.

Some WeChat apps to book the seats

You can log into the Shanghai Sports Bureau’s WeChat app “Laihudong 来沪动” to book courts and view a map of nearby sports venues.

How a postponed Asian Games will be a secret blessing for some Indian athletes
China’s former athletes recruited to teach fitness in schools with new state emphasis on exercise - ...
All the Easter holiday free events for children who get school meals