Drums, braids ‘so special’ for these kids

It’s that time again – kids across Canada are graduating.

“It’s like when you’re away somewhere and then everyone gets together, like with your family, you feel at home. That’s what my school feels like,” she told CBC Kids News.

She and other students at the John J. Sark Memorial have spent years learning Mi’kmaw, their ancestral language, along with other traditional practices such as drumming, incense, and sweetgrass weaving.

Now they will transfer to a public school outside of their First Nation where these practices will not be ingrained in the school climate.

CBC Kids News spoke to her and another graduate about what it’s been like to be immersed in culture classes for years and how it feels to make that transition.

Although Mi’kmaw culture is celebrated today at the John J. Sark Memorial, it wasn’t always so.

As late as the mid-1980s, the practice of Mi’kmaw culture, including everything from drumming to speaking the language, was illegal at the Lennox Island First Nation school.

Until then it was an Indian day school similar to a residential school except the children went home at the end of the day instead of staying overnight.

Many First Nations, Inuit and Métis children were forced to attend these schools where they were robbed of their culture and thousands died of abuse and neglect.

A celebration of Mi’kmaw

Since surrendering to the First Nation in 1987, educators, students and the community have worked to transform the school into a place where students learn to be proud of their culture.

For example, each morning the students announce the weather in both Mi’kmaw and English, which is broadcast through the congregation for all to hear. 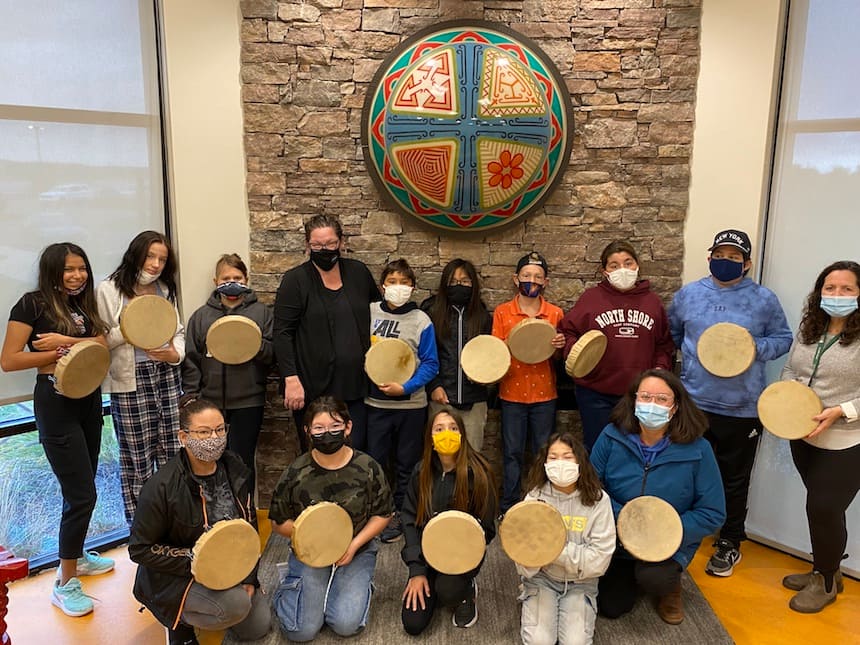 John J. Sark Memorial grades 5-6 pose with their drums in the school cafeteria. The students have learned a handful of songs in Mi’kmaw. (Image submitted by Christy Rossiter)

For the soon-to-be graduate, Anabella, these cultural practices made her proud of being Mi’kmaw, particularly learning to braid.

“I love braiding, and we must love our hair because when others went to boarding school, they didn’t have what we have. They couldn’t have long hair,” she said.

In addition to braiding hair, Anabella and other students learned how to braid sweet grass and rituals performed when taking from nature.

“It’s for Mother Earth. For us, when you take something out of the ground, you have to spread tobacco on the ground to honor the Creator,” she said. 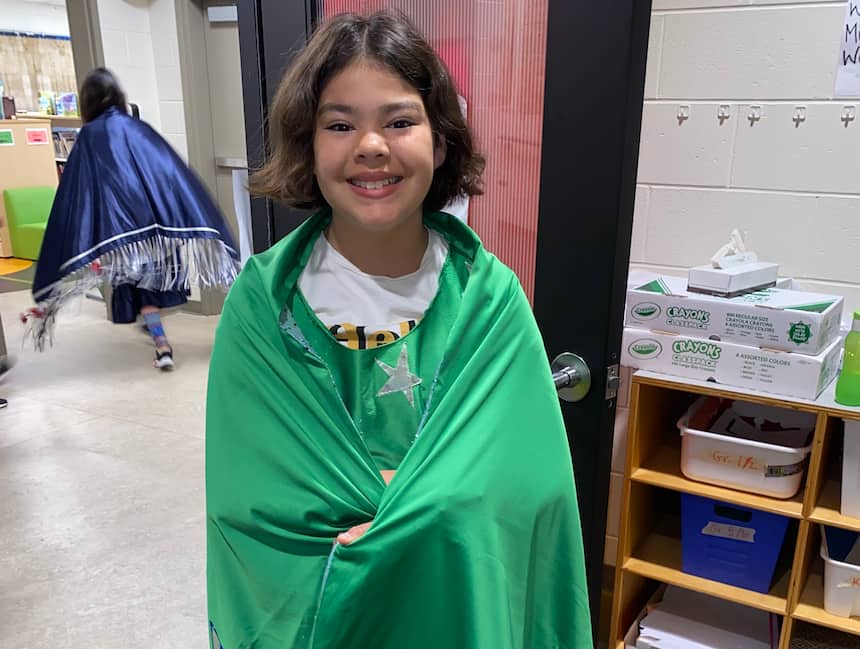 Her classmate, 12-year-old Riley Bernard, has also found joy and pride in his culture.

For him it is learning to drum.

“It just feels good,” he said.

“It’s part of my culture and I want to learn a lot about it because maybe someday I’d like to put a drum group together.” 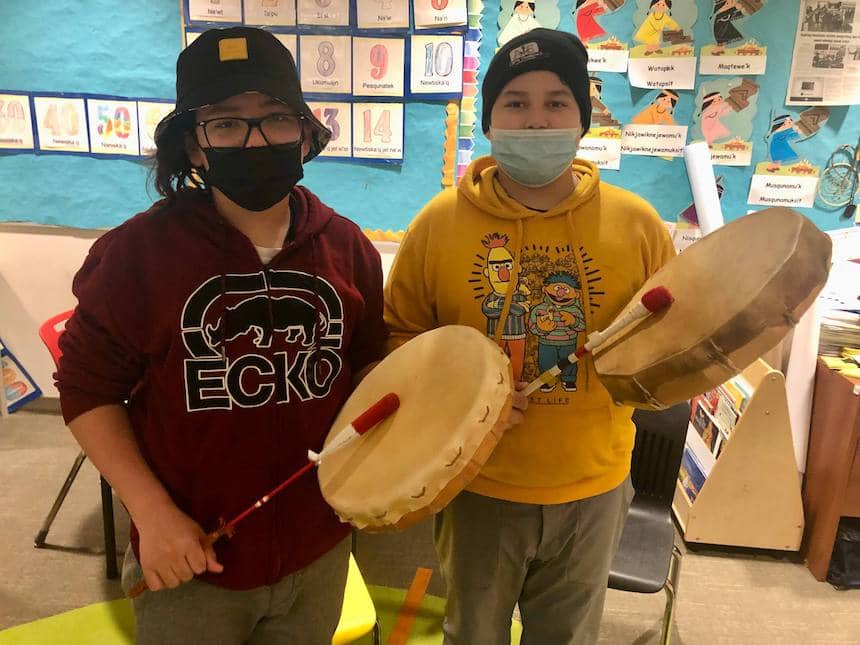 Riley said his fondest sixth grade memory happened recently when he and a few other students were drumming outside and several tourists stopped to listen.

He said performing in front of others feels liberating.

“I was kind of nervous about singing, but I sang anyway.”

Her new school is about a half-hour drive away and is a public school that does not specifically cater to First Nation students.

Anabella and Riley recently took a trip to Hernewood and were excited for the next stepping stone in their schooling. 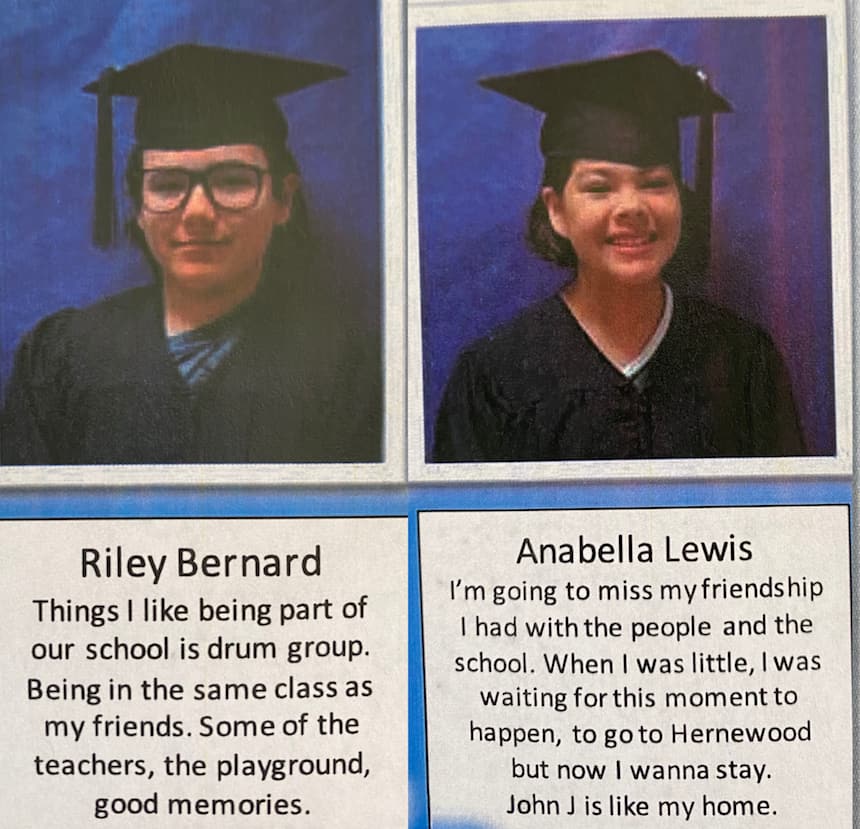 Riley and Anabella’s yearbook photos, along with their thoughts on what they like about their school. (Image submitted by Christy Rossiter)

“I’m pretty excited because I’ve been wanting to go there for a while,” Riley said.

Anabella, who loves sports, said she was really excited when she and other students were shown around her new school’s gym and says she can’t wait to play badminton.

But leaving elementary school is going to be tough, she said, mostly because it’s those cultural traditions that have made her feel at home.

“I’m sad because I’ve been here all my life. I just want to thank everyone who has helped me.”

Before graduation, Anabella and Riley will participate in a school-wide mini-powwow with their peers. As sixth grade students, they play a key role as leaders.

They will also host an official graduation ceremony on June 27th that will include song, dance and cultural celebrations as an ode to the school they are leaving behind.

Do you have further questions? Want to tell us how we’re doing? Use the Send Us Feedback link below. ⬇️⬇️⬇️

With files from CBC News