From a press release:

“Shortly after the successful opening of the Italian Bar, In Bocca al Lupo – meaning ‘in the mouth of the wolf’ or ‘good luck’ – opened today as the latest concept from hospitality powerhouses Carolyn and Massimo Papetti. That Pizzeria with an Italian football theme is located at 2400 Wisconsin Avenue NW in DC’s Glover Park neighborhood. 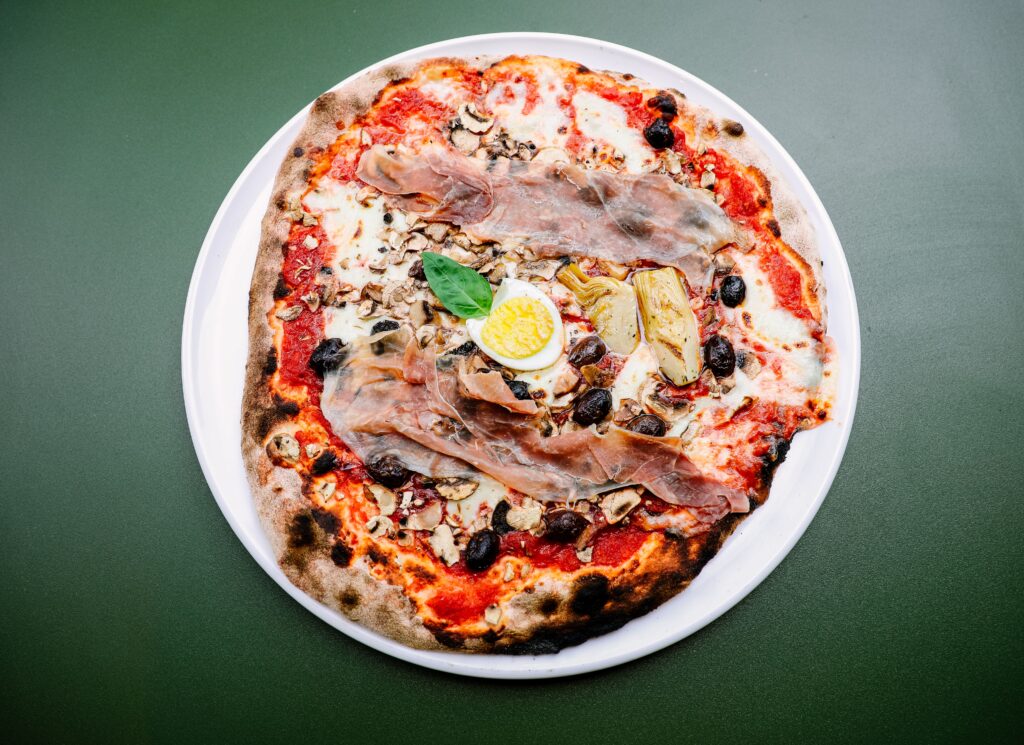 “We’re a very strong believer in community, and that’s why we wanted to bring In Bocca al Lupo to the Glover Park neighborhood,” says Carolyn Papetti. “Our kids go to school nearby, they play soccer nearby, and with that in mind, we wanted to create a space that was the perfect place to socialize as a community in a casual but fun environment on the same block as our other spots to get together.”

The core offer of In Bocca al Lupo is the Roman style pizza – Pizza Romana Tonda Bassa. Unlike any traditional American pizza or the Italian Neapolitan pizza that many are familiar with, Pizza Romana Tonda Bassa is a round pizza with a crispy, paper-thin crust. In many parts of Italy, this Roman-style pizza is known as “pizza bassa” (low pizza) to distinguish it from “pizza alta” (or high pizza – the Neapolitan style). The pizza is served uncut, which prevents the oil from getting on the crust and making it mushy.
The pizza menu at In Bocca al Luppo is divided into two sections; Pizza Bianche and Pizza Rossa. Each area offers a range of more traditional styles like quatro formaggi and margherita, as well as unique items like crocchettos (a ham and cheese pizza with potato croquettes). In addition to pizza, the menu also includes a selection of bruschetta and fritto, as well as cacio e pepe arancini and suppli (Roman fried rice balls with tomato sauce and mozzarella). 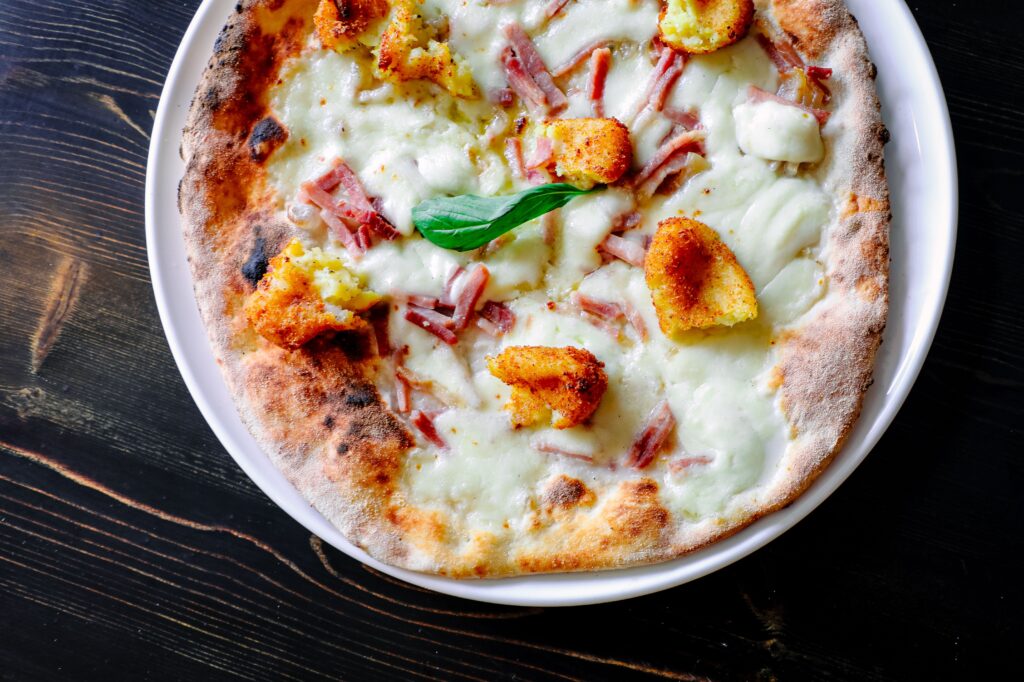 The kitchen is overseen by Chef de Cuisine Jacob Brown and Pizzaioli Maestro Fulvio de Rosa, a cousin of Massimo from Salerno, Italy. De Rosa has previously worked with renowned names in Italy such as Garbriele Bonci, one of Rome’s most respected pizzaiolo.

Bocca al Lupo also has a full-service bar specializing in Italian cocktails like Aperol Spritz, Negroni, and more. There is also wine and beer on tap.

The design – spearheaded by world-renowned Italian-American designer Esther Konrad – is a haven for Italian football lovers. Green and red benches, an ode to the colors of the Italian flag, surround the space. Imported Italian red chairs and yellow bar stools colorfully accent the bar. In the back corner is a small stage with a piano, which hosts live performances on weekends. While there are many references to Italian football throughout the space, the mural of Italy’s 11 best footballers of all time will be the most eye-catching (to be installed at the end of the month). Massimo Papetti, a die-hard Roma fan, naturally chose Francesco Totti as one of the featured players.

In Bocca al Lupo is a continuation of the couple’s vision to bring the best of Italian culture and hospitality to DC. Massimo is from Rome and met Carolyn while she was living in Italy. He followed her back to the United States in 2005 with dreams of one day opening his own restaurant that would remind him of his homeland. Carolyn, who has been the Food and Beverage Director at a legendary private DC dining and social club for the past five years, is a seasoned hospitality veteran who rose through the ranks as she opened some of the most sought-after restaurants in The Hampton such as Nick & Toni’s directed and Cittanuova.

Jump ahead a few years, and the Papetti’s have firmly established themselves as players in DC’s food scene. The couple’s first restaurant, opening in 2018, I’m Eddie Cano has received consistent high praise from the Michelin Guide and the Washington Post and is both a dining destination and a neighborhood favorite. In May 2022, Papetti’s Italian Bar opened next door as an ode to the standing bars on the streets of Rome, serving as a communal meeting place to enjoy Lavazza espresso coffee, pastries, panini and aperitivo.

Bocca al Lupo is now open 7 nights a week from 5pm to 10pm for indoor, al fresco and take out dining. There will be extended opening hours on Friday and Saturday. The restaurant operates on a first-come, first-served basis, with a waiting list powered by Yelp’s No Wait app. Guests residing within a mile of In Bucca al Lupo may put their names on the waiting list. All orders are made via QR code via the popular Square platform. In order to offer both fair wages and fair prices, the restaurant includes a 20 percent entertainment fee on all checks with no additional tip required.

The Papetti plans to add a weekend lunch service this fall. There will also be a public opening party in September, with tickets going on sale soon. The In Bocca al Lupo space will also be available for private events with total and partial buyout.”